Rand uncertainty as the turmoil in Turkey continues

Emerging market currencies are not having a good year. First it was the Argentinian Peso in May, and more recently the Turkish Lira has been hit as Turkey’s economy has collapsed in the wake of US tariffs. Other emerging market currencies, including those of South Africa, Brazil, Russia and India have been caught up in the selling too. Venezuela is in a league of its own.

In the case of Turkey and Argentina there were real problems behind the devaluation of their currencies. Argentina was forced to seek help from the IMF in May. In Turkey’s case a long list of events has eroded investor confidence in the economy. In the last two months alone, the President installed his son in law as Finance Minister and threatened to take control of the country’s monetary policy, and the US imposed new tariffs on Turkish imports. To make matters worse, a lot of Turkey’s government and corporate debt is denominated in US dollars, creating a vicious cycle of credit downgrades.

There are two important things to note. For most emerging market currencies, this is as much about dollar strength as it is about local currency weakness.  The selling has also been selective – emerging economies in East Asia and Eastern Europe have for the most part been spared, as has Mexico. The differentiating factor in most cases has been current account deficits – countries with widening deficits are the ones seeing their currencies lose value.

When it comes to the rand, there are numerous factors at play.

The bullish case for the rand

The bearish case for the rand

What do the charts say? 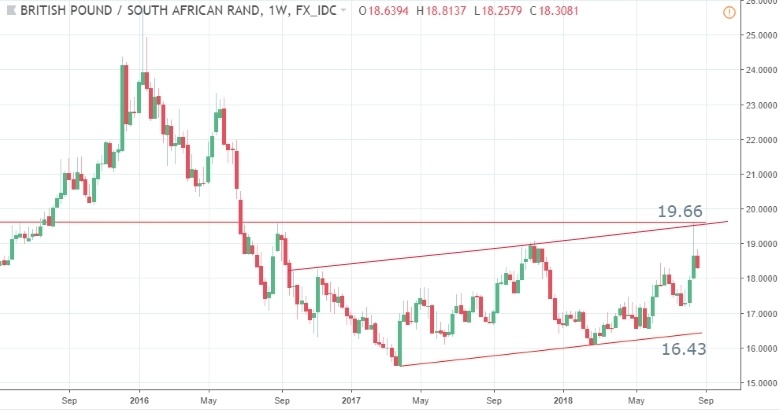 The GBPZAR rate encountered resistance at 19.66, and the pair appears to have formed a gradually rising channel for now. In the absence of a new catalyst, the pair will probably remain between 16.43 and 19.66.

The USDZAR did very briefly trade as high as 15.46, but for the most part has been contained below 14.68, with 14.50 also acting as resistance. The downtrend extending back to December 2017 has now been convincingly broken, however a new bullish channel has not yet been defined.

For now, rand weakness seems to be contained with strong resistance at 19.66 against the pound and 14.68 against the dollar. There is no immediate reason for the rand to trade higher than that.

The rand is however vulnerable and could experience an extended selloff if a combination of catalysts hit the market. These could include an escalation of the US China trade war, global equity market weakness, or an acceleration of ‘radical economic transformation’ in South Africa.

On the other hand, in the absence of further emerging market concerns, the rand would probably strengthen back to the middle of the recent trading ranges - to 13.50 against the dollar and 17.50 against the pound.